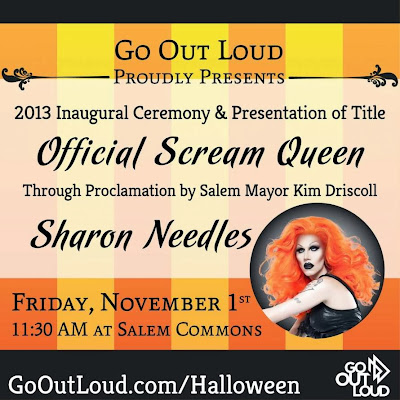 Promotional events platform, Go Out Loud, today announced that #ScreamOutLoud headliner and winner of “RuPaul’s Drag Race,” Sharon Needles, will receive the first-ever “Official Scream Queen” title granted from Go Out Loud with blessings from local political leaders, including US Representative John Tierney, Governor’s Council Eileen Duff, State Senator Joan Lovely, State Representative John Kennan, Salem City Council, Gary ‘Gigi - Queen of Salem’ Gill, and proclamation address from Mayor Kim Driscoll, in an event to be held the day after the Halloween experience at #ScreamOutLoud on Friday, November 1st at 11:30 AM at the Salem Common entrance located across from the Hawthorne Hotel.

The “Official Scream Queen” title and designation was created this year by Go Out Loud, as lead by founders Kevin Letourneau, Christopher Sicuranza and Thomas MacDonald, to award individuals who embody the spirit of Halloween through self-expression, while committing their voice loudly and proudly in support of important causes and communities. Local political leaders are showcasing support for the endeavor through their appearance at the event and special title designation from Salem Mayor Kim Driscoll.

“Salem is well-known for being the Halloween capital of the world, but we are also fortunate to be part of an extremely diverse and inclusive community that proudly stands up against discrimination and welcomes self-expression. I’m sure Sharon will feel quite at home here and we applaud her efforts in speaking out against bullying,” said Mayor Kim Driscoll

“I’m thrilled and humbled to be Salem’s first official Scream Queen, and look forward to revisiting my ancestry here,” said cult icon Sharon Needles. “It has always been my aim to live everyday like Halloween by celebrating individuality and creative freedom within a world of horror,” adding, “discrimination must always be drawn out, like venom from the wound.

A variety of ticket levels are now available to maximize the total value of the experience. General admission tickets are $69; Premium tickets, which include 2 drink tickets and a Trick R’ Treat Swag Bag, are $99; and Stoli Sponsored VIP tickets, which include a special meet-and-greet photo experience with Sharon Needles and 2 drink tickets, are $149. GOLD Card members save 10% off ticket cost, and for the month of October, GOLD Card Memberships are discounted from $55 to $31 to celebrate the 31 days until #ScreamOutLoud launches on Halloween night. Out of town guests are invited to use free shuttle service and discounted rates from the Boston-Peabody Holiday Inn using group code ‘GOL’ when booking online. Tickets and hotel stays can be purchased now on www.GoOutLoud.com/Halloween, but audiences are encouraged to purchase immediately as this stellar event is already at half capacity and expected to sell out.

ABOUT GO OUT LOUD
Created in late 2011, the Go Out Loud brand was established as an opportunity for the New England LGBT community, starting with the Greater Boston area, to engage in a variety of interest-based social activities to facilitate networking, empowering the community and supporting the local economy. Early events, under the original name of ‘Salem Out Loud,’ created a new kind of community that proved to be wildly successful with an average of 150 attendance supporting local businesses, working with politicians (US Senator Elizabeth Warren, Congressmen Barney Frank and John Tierney, Salem Mayor Kim Driscoll, various other city councilors) and individuals to embrace Pride to terrific success for both community members and businesses seeing an increase in new customers and sales.