Showing posts from September, 2011
Show all

The Eventi, A Kimpton Hotel 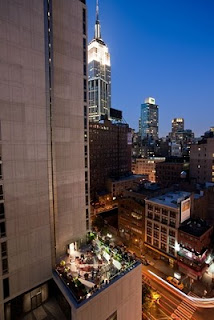 by Richard Brower In the middle of Manhattan, there is a gorgeous, sophisticated building that celebrates art. It’s not one of the many museums you might be thinking of, it’s the Kimpton Hotel Eventi. Located on 6th Avenue between 29th and 30th Streets, just walking into the lobby envelops you in sophisticated art without the pretense. Just steps from Herald Square, Penn Station and Madison Square Park, you really are in the center of New York at the Eventi. The lobby of the hotel is sophisticated and playful at the same time. A painting of the sky is mounted to the ceiling above the sitting area to encourage loungers to lay down as if they’re relaxing in a field on a warm summer’s day. Art peeks at you from behind curtains and doors, as if the Metropolitan Museum of Art decided to play hide and seek. The staff at the Eventi are what you would expect from a Kimpton property, superb and friendly, making sure you feel like they’re your friends rather than service employees. Many
Post a Comment
Read more

Imagine a traditional, Victorian style mirror in a frame of cobalt blue instead of gilt, and ottomans and chairs in classic shapes, re-imagined with unorthodox fabrics and finishes. Above, a crystal chandelier has been given a humorously macabre make-over with a thick coat of melting black rubber that drips like stalactites. These are just a few of the surprising sights and delights a visitor will find when they enter LA Premier. The brainchild of two young designers, Jay Michael and Joe Balanzar, LA Premier opened on August 21, 2011 as a showcase for the dynamic duo’s unique and sometimes challenging design vision. Everything in the showroom demands a second look. Blending elements of cyberpunk, Japanese anime, re-imagined Victorian, and the urban brutalism of designers like Frank Gehry with the colorful spirit of Modernist Kelly Wearstler, Joe Balanzar and Jay Michael have created and curated a collection of furniture that expresses their irreverent artistic vision. Balan
Post a Comment
Read more
More posts