Showing posts from 2016
Show all

LGBTea is a brand of tea that not only delights the taste buds with exotic flavors, like Raging Raspberry and Juicy Tangerine, but also donates a portion of every sale they make to assist charities in advocating for LGBT rights. Not only does LGBTea donate to other charities such as HRC , The Trevor Project and LGBT Foundation , but it is also in the process of forming its own foundation, titled the LGBTea Foundation, which works toward achieving the company’s goal of LGBT rights and equality. LGBTea is trying to get the word out about their new product through their campaign to launch remarkable teas with intriguing flavors, while also encouraging the celebration of love. While they already donate a substantial amount of money to charities advocating for LGBT rights, starting October 11 and continuing thru to November 28, they will be launching a crowdfunding campaign on Indiegogo . During this promotion, 10% of the campaign funds received will go back to the LGBTea Fou
11 comments
Read more 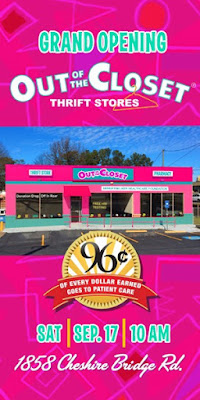 Charity thrifting comes to Cheshire Bridge when Out of the Closet Thrift Stores benefiting AIDS Healthcare Foundation launches its Atlanta location with the Out of the Closet Grand Opening Ribbon Cutting with DJ and Food Truck on site this Saturday.. Shop with your Thrifting Atlanta tote bag and get 15% off your purchase! 1858 Cheshire Bridge Rd. NE, Atlanta, GA  30324 LINKS: https://www.facebook.com/events/1254875367890523/ http://www.outofthecloset.org Our FABULOUS art director, eiotown, makes the best window displays! These and more will be on display at our Atlanta location opening this weekend!
1 comment
Read more 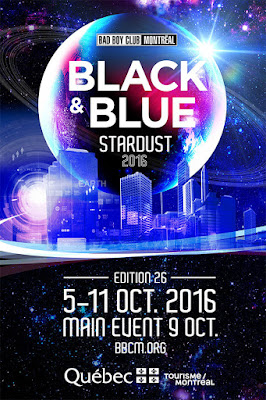 Last week for tickets at presale price The legendary DJ Star, Danny Howells, will be featured at the 2016 Black & Blue main event The BBCM Foundation is pleased to announce the list of DJs for STARDUST, the main all-night event, Sunday, October 9 at the Pierre-Charbonneau Center in Montreal. DJs for other major parties are also disclosed. Moreover, a reminder that tickets at presale prices for this event will end on August 31st. Danny Howells, Unique and Legendary The organizers are especially proud to announce, for the first time at the Black & Blue, one of the global giants of the House music scene, legendary British DJ Danny Howells . He will take part in a special extended set. Native Londoner (UK), his music is often described as belonging to Progressive House, although he prefers positioning himself closer to Tech House and sometimes being referred to as Progressive. He created his Dig Deeper label in 2008. “Montrealers will remember his legendary 13-hour m
2 comments
Read more 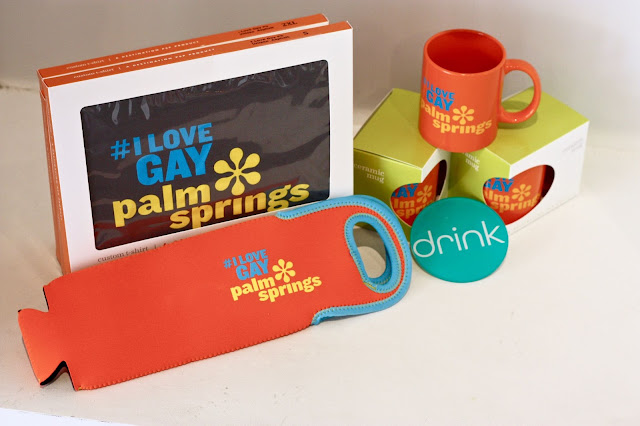 New line of products helps promote social media effort to bring together all conversations about events and news for the Palm Springs LGBT community  Palm Springs merchandising and marketing company Destination PSP has partnered with GayDesertGuide.com and LGBTBrandvoice.com to create a new brand and social media hashtag that will be promoted on a line of merchandise. #ILoveGayPalmSprings unites LGBT social media content across the Coachella Valley and provides the LGBT community with a share of voice in daily online conversations.  The initial merchandise items created by Destination PSP include colorful t-shirts, wine carriers, and coffee mugs are available at the Destination PSP store in downtown Palm Springs at 170 North Palm Canyon, Palm Springs, CA 92262. Link to Specialty Product Page: http://www.destinationpsp.com/specialty-shops/i-love-gay-palm-springs.html “Destination PSP has a long history of supporting our local community,” said Jeffrey Bernstein, co-owner o
2 comments
Read more 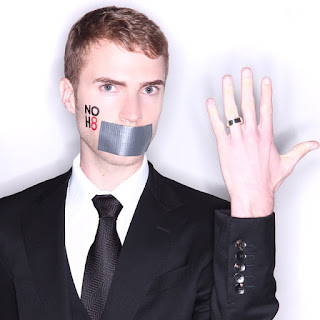 Pride Con is pleased to announce Shane Bitney Crone and Rayvon Owen will be Guests of Honor at its inaugural convention. Pride Con, Be Proud, is a two-day convention scheduled for July 29th through 30th, 2016, at the Hilton Anaheim in Anaheim, CA. Together, they will participate in panel sessions, meet-n-greets, autograph sessions, and more. In addition, Rayvon will be performing live as well. About Shane Bitney Crone Shane Bitney Crone is an LGBT advocate, writer, and speaker. He grew up in rural Montana, which presented a number of challenges as he grew up and struggled with his identity. Shane made headlines in May 2012 when he released a video on YouTube titled It Could Happen to You , in which he spoke of the devastation he faced after the unexpected death of his longtime life partner, Tom Bridegroom, a year earlier. The video went viral within a matter of days and has since been viewed over 20 million times on YouTube and other social media platforms. GLAAD named it one o
1 comment
Read more 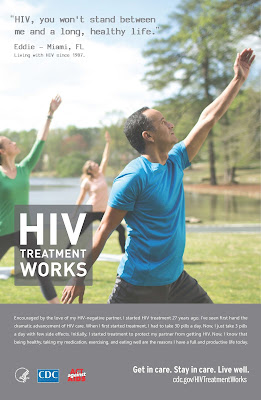 Actor, Writer, and Producer Mike C. Manning to be Guests of Honor at Pride Con 2016 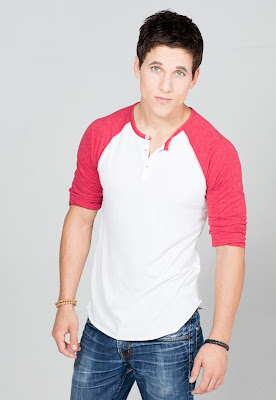 Pride Con is pleased to announce Mike C. Manning will be a Guest of Honor at its inaugural convention. Pride Con, Be Proud , is a two-day convention scheduled for July 29th through 30th, 2016, at the Hilton Anaheim in Anaheim, CA. He will participate in panel sessions, meet-n-greets, autograph sessions, and more. Mike C. Manning is an actor, writer and producer of award-winning film and television content. Mike was seen starring in the Disney Channel Original Movie Cloud 9 . His role as Nick Swift played well to Manning’s strengths and interests in extreme sports including skydiving, bungee jumping and snowboarding. Manning stars in the upcoming film Love Is All You Need , alongside Elisabeth Rohm, Briana Evigan, Emily Osmett, and Tyler Blackburn. Manning will also be seen in the Jeff Grace-directed film Folk Hero & Funny Guy , with Wyatt Russell, Melanie Lynskey, and New Girl’s Hannah Simone, which premiered at the Tribeca Film Festival in April, 2016. In addition to acti
1 comment
Read more 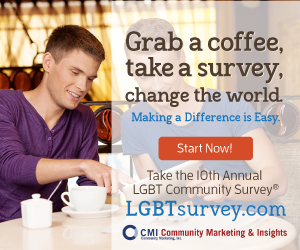 You are invited to take a new survey about your opinions and preferences, from an LGBT perspective. There's power in our Pride! Participating in this study helps open doors-and minds-around the world, and influences positive changes for our community. Previous surveys have yielded 45,000 respondents from 150 countries! You may have seen Community Marketing & Insights quoted in the New York Times, USA Today, Wall Street Journal, etc. Click here to start the survey, or paste the following into your browser: http://survey.communitymarketinginc.com/se.ashx?s=359D342B515CFBDF&CMID=160 It should take 10-12 minutes to complete. Everyone who completes the survey by May 31, 2016 may opt to be entered into a drawing to win one of twenty US $50 cash prizes, or if you win, you can designate a charity to receive the $50. Please forward this message to LGBT friends around the world who may be interested in participating. And please post it to your Facebook, Twitter and Link
Post a Comment
Read more 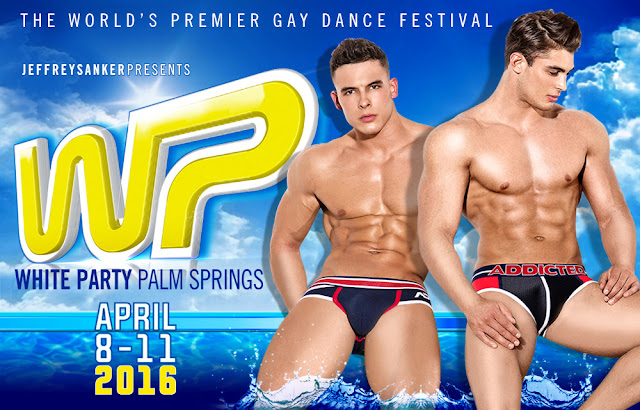 #1. The  location.  One of the most gorgeous and gay-friendly oases on the planet, Southern California’s sunny Palm Springs boasts glorious April high temps in the upper 80s, loads of fantastic shopping and dining possibilities, tons of stunning and easily accessible nature nearby, and a rich cultural landscape that includes some of the world’s best modernist design and architecture. It’s also literally teeming with excellent accommodation options, from five star hotels to clothing optional resorts to private rentals on Airbnb and VRBO . #2. The history.  Since its launch way back in 1989, Jeffrey Sanker’s White Party Palm Springs has become one of the most iconic and popular event in the world, drawing some 30,000 attendees every year. Its musical roster through the years reads like a veritable who’s who of gay pop and dance icons, including Lady Gaga, Jennifer Lopez, Deborah Cox, Jordin Sparks (left), Kesha, Taylor Dayne, Anastasia, Carly Rae Jepsen, Ariana Grande,
1 comment
Read more

Sex Tips For Straight Women From A Gay Man

Perfect date night or girl's night out! In this hilarious new three-character comedy based on the best-selling book of the same title, audiences are welcomed into a fun-filled world of foolproof moves and insider advice that could only be culled from that most insightful of individuals: the gay man. The play is set at a local university auditorium where the English Department holds its monthly meet the authors event.  Robyn is the shy and studious moderator of the event and this month's featured author is Dan Anderson of Sex Tips for Straight Women from a Gay Man.  The third character is a hunky stage assistant of Eastern European descent, Stefan. Thwarting Robyn's attempts to moderate a scholarly discussion of the book, Dan aims to entertain those in attendance with a highly theatrical, audience-interactive sex tip seminar.  Will the power of Dan's tips prove too titillating for even Robyn to resist?  Will Stefan's muscles be used for more than moving heavy
Post a Comment
Read more

In the news recently were a series of articles about how an increasing number of Americans are traveling to Germany for their education, as German universities offer free education to both their citizens and foreign students alike.  That's just the cherry on top when it comes to LGBT visitors to Germany, who have been coming year after year to enjoy all that Germany has to offer the LGBT traveler.  With Germany's progressive acceptance of gay & lesbian life, ranging from its varied nightlife in Berlin to its same-sex domestic partnership laws, it's no wonder it ranks as one of the top European destinations gays & lesbians travel to year after year (source: Community Marketing & Insights, 20th LGBT Tourism & Hospitality Survey) . While someone speaking English in Germany can get by in most places, having at least a foundation in basic German will open up a whole host of life experiences and opportunities simply not available to those not understanding
305 comments
Read more
More posts