By Pink Banana Media - August 08, 2008
I had the opportunity to sit down recently with Shane Charles, producer and host of the new show, EGTV, which is short for Entertainment Gay Television. After watching their pilot episode and interviewing both Shane and Marcelo Acevedo, EGTV's Executive Producer, I would say that as a cross between E! Entertainment and MTV, but made for a gay audience, this new monthly series is a sure winner as it touches on aspects of gay life that are both current and incredibly entertaining at the same time. 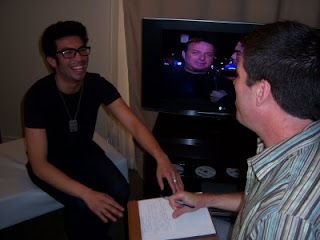 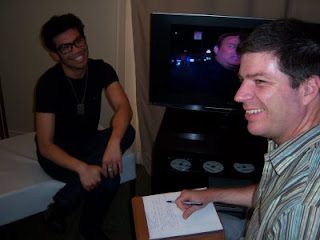 Interviewing Shane Charles at his Hollywood Press Junket
Covering various cities and the gay events that surround them, one might think the focus and scope of this new show is a bit more travel related. Although it definitely will peak the interest of local tourist boards wishing to bring in more GLBT travelers, it's audience is quite a bit broader, appealing both to those wishing to get to know a destination better as well as those who live in the city and enjoy seeing their nightlife through the eyes of this fun and entertaining team. With a tag line of "Where to stay, where to play, what to eat, and who to meet" how can they go wrong!

The show EGTV is designed to be one hour in length, produced monthly to start and more frequently once their distribution increases. They're currently seeking to have the show be a part of here! TV, Logo or Bravo's network, but with the advances in video technology online, as well as the interest from various clubs around the country to air this show as well, their distribution model may well be one that taps into some of the latest in technologies, venues and perhaps even social networking advances we're seeing in 2008.