Life Positive: A Journey to the Center of My Heart 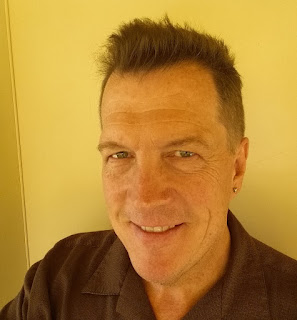 Author/Activist Nicholas Snow is offering a free, worldwide digital download of his living-powerfully-with-HIV memoir—Life Positive: A Journey to The Center of My Heart—to inspire everyone participating in the fight against HIV/AIDS, and to further champion awareness of the importance of HIV testing.

Writes editor Kristin Johnson, “From Hollywood to Bangkok, to Bali and beyond, including Kuala Lumpur and Palm Springs — with profound expansion to Singapore, Mumbai and throughout all of Asia, and ultimately in 21 languages across the globe — Life Positive: A Journey to the Center of My Heart could easily be titled Eat, Pray, Disclose.”

While this written-as-he-lived-it story is truly global in nature, it was completed and edited in Snow's current home of Palm Springs, California where he is grateful to be a client of Desert AIDS Project.
“This book is dedicated to the tens of millions of people in the world living with HIV, most of whom do not yet know their status; to everyone who fights for us; and to those who still fear us,” says Snow. 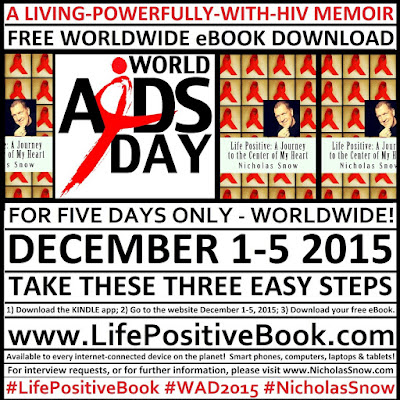 To participate, simply download the Kindle App (for Mac or Android) to any internet-connected, app-enabled smart phone, computer, tablet or other device.  Then, any time from December 1st-5th, 2015 (in any time zone), visit www.LifePositiveBook.com (which redirects to book’s official Amazon.com page) to download your free Kindle copy.

Members of the media, reviewers, and anyone who wishes to promote the free World AIDS Day giveaway may download a copy early, following the same steps, on November 12th, 2015.  Subscribers to Amazon Prime may check out the book with their Kindle at anytime as allowed by their membership benefits. 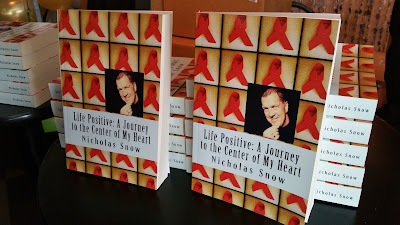 Johnson continues, in her official synopsis…
“In Bangkok, Thailand, Hollywood's primo promo homo on the go-go Nicholas Snow is eking out a modest living as a foreign correspondent, actor and media personality when, in a moment of personal desperation, he makes a decision that changes his life forever.

Decades into the AIDS pandemic and completely armed with the knowledge to protect himself, during a moment of passion with a man who is unaware of having HIV, Nicholas has a rare slip in his safer sex behavior and becomes HIV positive.

What might have been the end of a lifetime of dreams turns out to be only the beginning of a remarkable journey that Nicholas himself chronicles in real time as he is living it. Part 12-step-program 4th-step inventory, part reality-show-on-paper, this is the painful yet triumphant saga of how Nicholas Snow uses his own mistake as an opportunity to empower millions of people throughout the world by disclosing not only his HIV status, but his experience, strength and hope as well.”

Since going public with his HIV status at a press conference in Bangkok, Thailand, Snow has become one of the world’s leading freelance proponents of HIV testing.  His HIV Testing/Safer Sex Awareness anthem—The Power to Be Strong—and related campaign has reached millions of people, including on national television in Malaysia and Thailand.  Snow visited Kuala Lumpur on behalf of the PT Foundation and Malaysian AIDS Council, generating media impressions reaching 2.5 million people—10% of Malaysia’s population.  Snow’s song is in English, but the music video is available for viewing and sharing, subtitled in 21 languages on YouTube.

Snow is also the producer and host of the hit podcast, The Nicholas Snow Show, which in the summer of 2015 surpassed over 1.8 million total listens since premiering in late June 2012.  He is a contributor to The Huffington Post and the author of A Return to Brokeback Mountain: Photos & Interviews from the Historic Hollywood Premiere (exclusively for Kindle users).

"I want to thank my friends and colleagues in journalism, activism, public relations and life for helping me promote the giveaway of my story," says Snow.  Those initially on board include Gilles Denizot, co-founder of The Red Ribbon Facebook page with close to half a million members; Chael Needle, editor of A&U, Amerca's AIDS Magazines; super activist Kevin Maloney, founder of the Ris eUpToHIV initiative; and PR gurus across the globe, including Karin Lohitnavy of MidasPR in Bangkok, Thailand; David Gray of Gray Public Relations and Marketing; and Snow's longtime friends and collaborators, Matt Skallerud and Fabrice Tasendo of PinkBananaMedia.com.

Summing up his growing body of work, Snow explains, "My personal mission statement is to honor and express my creativity in a way that makes a difference.”

Nicholas Snow is available for interviews via telephone, Skype and/or in person, and may be reached via the contact link at www.NicholasSnow.com.