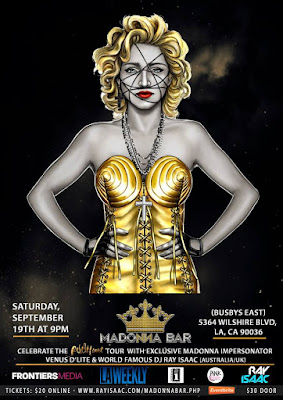 International DJ RAY ISAAC has announced the official debut of MADONNA BAR Los Angeles in September. The highly-anticipated event, which launched last year in Sydney Australia, is said to commemorate the pop icon. In a statement to herald the upcoming engagement, RAY ISAAC said, “Madonna BAR is the premium experience”. RAY, a pop singer, songwriter, and DJ will be hosting the exclusive event. Ray goes on to say, “This is a monthly event especially for the die hard Madonna family as we pay tribute to her music and how she has impacted our lives”.

This new event, which touts the phrase “Express Yourself at MADONNA BAR”, opens its doors to guests for its grand opening Red Carpet Launch on Saturday September 19th, 2015 at Busbys East. RAY ISAAC has invited internationally known Madonna impersonator Venus D'Lite, (Ru Paul's Drag Race, My Strange Addiction, and Botched) who will be giving a special performance. In addition to the live show, RAY will provide music for the evening including several of Madonna's rare early years songs, unreleased songs, 12” album tracks, 80's, 90’s hits, and her current mixes.

RAY ISAAC, was quoted by SX Australia saying: “Madonna Bar is dedicated to all things Madonna for her real fans”. Having an affinity for the star since a young age, and following success of the Sydney launch, RAY is excited to bring the event to Los Angeles.  As a chart-topping performer himself, RAY ISAAC is renowned for his ability to engage a crowd with his candid song lyrics and energetic performance style. With special guest Madonna Impersonator, Venus D'Lite, RAY ISAAC is revealing an innovative, interactive event that will appeal to the entire Madonna family of fans and supporters. MADONNA BAR LA is encouraging all individuals to embrace who they are. Everybody is a star, you know who you, This is your chance to shine!.