By Unknown - March 04, 2015
Pop recording artist and philanthropist Sir Ivan has released a new single titled “Kiss All the Bullies Goodbye” in support of his anti-bullying campaign with The Peaceman Foundation. The track was produced by Paul Oakenfold, and features vocals by chart-topping singer Taylor Dayne and lyrics that condemn bullying and encourage people to be different and tolerant. Sir Ivan has also released an accompanying music video directed by Erik White (Ryan Murphy’s The Glee Project).

Sir Ivan, who is best known for his pop-dance remakes of 1960s and ‘70s hits, including “Imagine,” “San Francisco,” and “Live For Today,” is a strong advocate against violence and intolerance who also goes by the pseudonym Peaceman. The Peaceman Foundation was founded by Sir Ivan in 2005 as a non-profit charity that battles hatred, violence and Post Traumatic Stress Disorder (PTSD).

In conjunction with the release of this track, Sir Ivan, through the Peaceman Foundation, has pledged to donate a total of $100,000 to ten key non-profit organizations that combat bullying and intolerance, including: The It Gets Better Project; the Gay, Lesbian & Straight Educational Network (GLSEN); the Born This Way Foundation; Pacer’s National Bullying Prevention Center; Parents & Friends of Lesbians & Gays (PFLAG); Stomp Out Bullying; Campus Pride; Love is Louder/The Jed Foundation; The Trevor Project; and the Anti-Defamation League. The donation will include all net proceeds from video views, song streams and downloads of “Kiss All the Bullies Goodbye.”

“As the son of a Holocaust survivor, I’ve always been an activist for people who have been persecuted,” said Sir Ivan. “I was brought up with a heightened awareness of the harm that being perceived as different can cause. Through my music, I want to demonstrate the importance of acceptance and understanding. Young people, especially LGBT youth, often lack a support system and are more likely to be harassed and bullied, and I, for one, will not stand for it. I hope people will unite with me against this injustice. Anti-bullying organizations provide critical support services to LGBT youth to help prevent suicide and empower young people to be proud of who they are, and I’m determined to support them in doing this.” 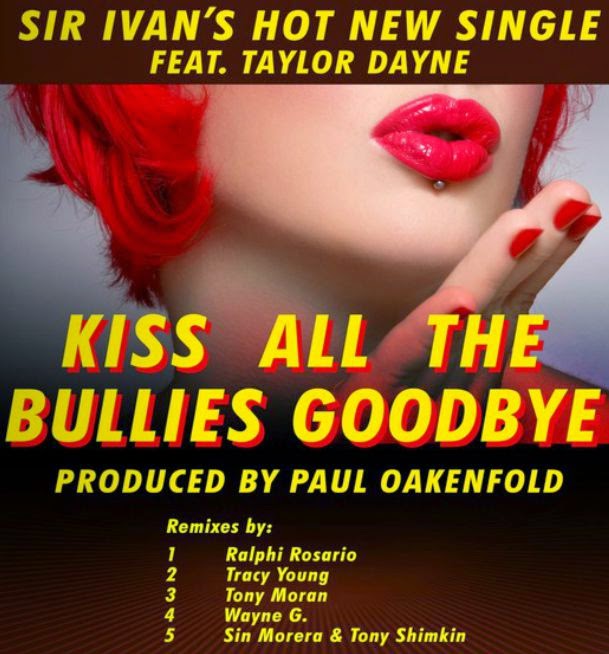 You can watch the “Kiss All the Bullies Goodbye” video above or go to:
https://www.youtube.com/watch?v=jz-7LfMHyZM

Download the Radio Mixes on iTunes here, the Club Mixes here and the Dub Mixes here. Mixes are also available on Beatport and Amazon.

Sir Ivan has also created a page on his website with statistics about bullying and ways to help:  http://www.SirIvan.com/Kiss-All-The-Bullies-Goodbye