By Pink Banana Media - October 06, 2014
Whether you're making a statement against homophobia, or you're a Jack Nicholson / Steven King fan looking for a t-shirt with a "gay twist", look no further than BMP T-Shirts.  Created by New Jersey residents Diane & Kathy, these designs are just in time for showing the world who we are, while providing incredibly unique designs perfect for this holiday season! 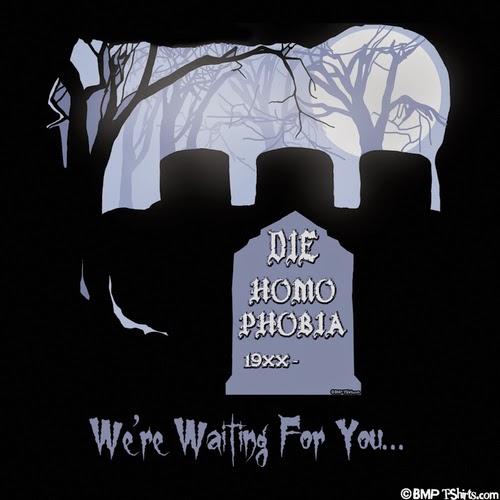 Spooky Gay T-Shirt - We're Waiting For You Unisex T-Shirt
This design was 2 years in the making. We felt strongly about depicting homophobia as the “horror” it is for gay people when taken to the extreme. The idea came from the murder of Matthew Shepard in October 1998 as a result of homophobia. We struggled with this due to the sensitive nature of that event and we did not want to be disrespectful to the Shepard family or their organization. We scrapped it several times but would reconsider it once in awhile.

In spite of all the hard-won victories, homophobia still exists. Three black headstones placed in the background are a reference to Harvey Milk, Matthew Shepard, and Tyler Clementi, who suffered the same fate but for different reasons.

Since homophobia is a feeling and not a person, we didn’t want it to “Rest In Peace”. We replaced "RIP" with "DIE" and used 19XX as the indefinable “birth” date.

The tag line of “We are waiting for you…” is with the eerie hope that one day homophobia will be taken to its final death. 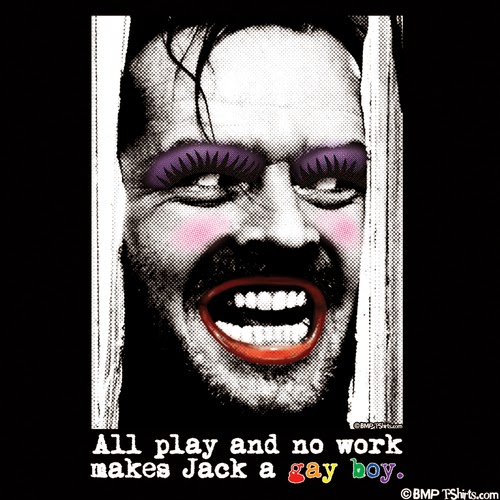 Funny Gay T-Shirt - All Play And No Work Unisex T-Shirt
We couldn't resist doing a parody of our favorite horror film "The Shining" with a gay twist! We imagined "Jack" as a drag queen and here you go... Happy Halloween! Available in Black.
http://www.bmpt-shirts.com/funny-gay-t-shirt-all-play-and-no-work-unisex-t-shirt/

To peruse the rest of their LGBT collection, be sure to check out:
www.bmtp-shirts.com