Imagine a traditional, Victorian style mirror in a frame of cobalt blue instead of gilt, and ottomans and chairs in classic shapes, re-imagined with unorthodox fabrics and finishes. Above, a crystal chandelier has been given a humorously macabre make-over with a thick coat of melting black rubber that drips like stalactites.

These are just a few of the surprising sights and delights a visitor will find when they enter LA Premier. The brainchild of two young designers, Jay Michael and Joe Balanzar, LA Premier opened on August 21, 2011 as a showcase for the dynamic duo’s unique and sometimes challenging design vision.

Everything in the showroom demands a second look. Blending elements of cyberpunk, Japanese anime, re-imagined Victorian, and the urban brutalism of designers like Frank Gehry with the colorful spirit of Modernist Kelly Wearstler, Joe Balanzar and Jay Michael have created and curated a collection of furniture that expresses their irreverent artistic vision. 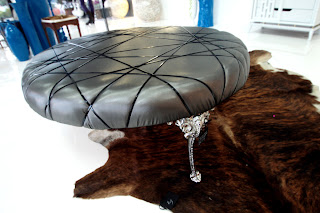 Balanzar and Michael, partners in life as well as business, happily subvert all expectations by re-purposing factory and military artifacts and subjecting traditional pieces of furniture to extreme industrial methods and techniques, including the use of high-gloss automobile paint, and occasionally, blow torches. Metallic finishes, both polished and painted are an important part of their hard-edged and hyper-masculine style. They share an unfiltered aesthetic that is unfettered by design convention.