Our Gay Hollywood Adventures with Out & About Tours 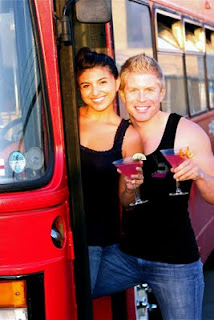 Last Friday, a group of us had the opportunity to attend the "Pre-Tour" of the upcoming LGBT gay history bus tour that Out & About Tours is putting together here in West Hollywood, making its debut for Halloween 2009!
Offering an in-depth yet entertaining look at LGBT history and its hotspots not found in your average LA travel guide, we undertook one hell of a fun "journey" through LGBT history beginning with LA's pre-Spanish settlement era, continuing through the Golden Age of Hollywood, the gay rights movement of the 60s & 70s and ending in present day.
We began in West Hollywood, continued on through Downtown LA, via Echo Park and Silverlake and then returned through Hollywood. We saw it all... from LA's first gay porn theatre to a Judy Garland performance at The Other Side piano bar in Silverlake. We even had a chance to enjoy a cocktail there as well!
From their website, here are some of the tour highlights:
The tour itself runs on Saturdays and Sundays, as well as every other Friday. It departs from the ONE Archives Gallery & Museum in West Hollywood (which is a treat unto itself). From Out & About Tours, "the tour enlightens, educates and encourages riders to reflect on how history has shaped today’s gay-experience."
Check out this video we made from our trip, at:
http://www.youtube.com/watch?v=HaCUPmBGsac
Their most recent article:
http://www.pinkbananaworld.com/content-detail.cfm?id=289144
Their official website:
http://www.outandabout-tours.com/
gay history la gay history los angeles gay history west hollywood glbt history lgbt history