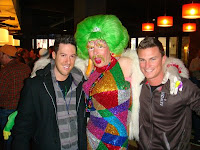 It's been a long time since I've had such a good time on the slopes with a few hundred of my new favorite ski buddies!
I arrived in Telluride on a Saturday, February 21st, just as the Telluride Gay Ski Week was beginning.  Flying in direct from LA made it all that much smoother, and after a relaxing evening of getting settled in, I was ready to shred the slopes on Sunday.... and shred I did, from the sunny early morning slopes to the still sunny late afternoon runs.  I couldn't believe it... the weather was absolutely gorgeous at 10,000' elevation.
But as they say, no rest for the wicked, and that's the way this week began... as Sunday night was Oscar night, the folks hosting the Telluride Gay Ski Week spared no expense in making sure that everyone there had a great time.  With the Oscar party pre-show at the Apres Ski Logo Lounge to the Oscar Ball shortly thereafter, everyone arriving early to Telluride had a great time celebrating Dustin Lance Black's presentation speech for Milk together.
And this is the way the entire week went... ski by day and party by night.  On Tuesday night, the first blowout party was held at Tommy's.  Everyone was there, including the star of the night, Reichen Lemkuhl, debuting his Fly Naked line of jewelry.  Most of us stayed until 2 am, dancing the night away.  The hosts of this week also ensured that there was plenty to do during moments of downtime, including recommended restaurants in town for all of us to enjoy, as well as a special Spa Day for that necessary day off of relaxation from the slopes.
Thursday skiing was fun, as there was a very entertaining "Drag Race," with the winner strutting the finest ski drag costume I've seen in years... Miss Harlot O'Scara!  Thursday night was the biggest party, by far, however... the legendary White Nights party with the Perry Twins Doug and Derek Perry spinning and getting the entire crowd going strong.  This party was a packed house, with locals arriving and mixing with all of us out-of-towners, straight and gay alike.
Of course, like troopers, we were all ready to ski again, and that's the way this entire week went, until by Saturday we were all wiped out but grinning ear-to-ear with big smiles on our faces from having had such a great time and meeting such wonderful people.  And Telluride, true to form, made sure we left with a bang... with their annual Telluride AIDS Benefit Fashion Show.  I don't think I ever saw a fashion show like this... it was the New York chic of Ugly Betty meets some of the most whacked out looks and styles from the edges of Berlin... and all on display for us in the mountains of Colorado!
And that's how I'd like to wrap up this summary of Telluride Gay Ski Week... the people.  I met some of the best people on this trip, and made true lifelong friends along the way.  There were so many different "scenes" to remember... like when the timid straight man with his girlfriend and her best friend all meekly came into the Apres Ski Lounge not knowing what to expect.  By the time they left, they were all posing for photos, sitting on our laps and having a fantastic evening.  That's the way the entire week went, and as the crowd changed day by day with some folks arriving early and others a bit later in the week, the mix of people just got better and better.  There was no one type of guy or girl there, either... it was a very healthy mix of some very cool lesbian skiiers... some hot, young skiiers... some older, muscular bear skiiers... and the rest of us in between!
I can't wait to return next year!
Thanks again to Scott Barretto and John McGill of StraightOut Media & Marketing for putting on such a wonderful event!
Photo link: http://www.flickr.com/photos/mattskal/sets/72157614641015311/
gay ski telluride