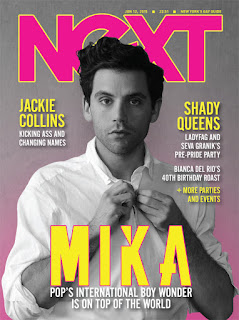 Multimedia Platforms, Inc., the only LGBTQ publicly traded media company, today announced closing on the acquisition of New York's leading gay lifestyle weekly resource Next Magazine from RND Publications. Next began publishing in 1993 and today has over 50,000 weekly print readers, in excess of 120,000 monthly on-line unique visitors, 14,000 Twitter followers and a following on Facebook that exceeds 75,000 fans. Multimedia Platforms current Vice President and Chief Operating Officer, Kevin Hopper, will be appointed Publisher of NEXT.

With the closing of Next, MMPW has further consolidated the LGBTQ media marketplace by connecting top brands in top markets to create one, unified, national brand. These markets represent highly sought after target areas for Fortune 500 companies to reach a large percentage of the $850 Billion total purchasing power of the U.S. LGBTQ community. Leading global brands including Marriott, Nike, American Airlines, Starbucks and Walmart have all displayed support for the community and increased their advertising efforts targeting this loyal and influential community.

Bobby Blair, Chief Executive Officer of Multimedia Platforms, stated, "We are pleased to purchase a globally recognized brand with 23 years of publishing the highest quality content in one of the most sought after media markets in the world. We will be connecting the global LGBTQ community, businesses and advertisers for the first time by providing news, entertainment, and connections through print, online and social media channels. Advertisers and businesses will benefit from the flow of information through the ability to quickly deploy content via one centralized location. We are currently in advanced discussions to continue rolling-up and consolidating the fragmented LGBTQ media market.”

David Moyal, Founder of Next Magazine, commented, “We are extremely excited to have finalized our agreement with Bobby and Multimedia Platforms. I firmly believe in his vision and the strategy that the Company is embarking on as evidenced by my decision to accept approximately 80% of the terms of our agreement in Multimedia Platforms equity. It is a vote of confidence in the team and long-term prospects as together we will continue to give the LGBTQ community a strong voice.”


ABOUT MULTIMEDIA PLATFORMS INC.:
Multimedia Platforms Inc. ("MMPW") is a publicly traded industry-leading Multimedia Technology and Publishing company that integrates print media with social media, and related online platforms, to deliver information and advertising to niche markets. MMP teams utilize its proven business model to deliver niche publications and online platforms that target one of the most sought-after demographics in the world, the Lesbian, Gay, Bisexual and Transgender population. MMP has recently expanded its concept to include video and mobile applications reaching deep into the international LGBTQ community. MMP's top brands include The Agenda, a Florida-based weekly LGBTQ newspaper covering world, national and local news and events; and Guy Magazine, a weekly entertainment and lifestyle full-color publication covering the burgeoning South Florida LGBTQ marketplace. MMP's plan to interweave print, web and mobile delivery of the highest quality news and entertainment information via a variety of platforms crosses all cultural, generational and preferred modality barriers to reach an unprecedented audience.

ABOUT NEXT MAGAZINE:
Next Magazine is "New York's Gay Guide" -- a weekly comprehensive lifestyle resource for all gay New Yorkers, regardless of skin color, ethnic background or economic status. Since 1993, we have aimed to highlight both the popular and under the radar events, personalities and products that appeal to such a diverse range of gay men, especially when those stories are about gay New Yorkers themselves. Colorful, fun and always with a good sense of humor, Next's provocative commentary on nightlife, entertainment, politics, fashion, sports and celebrity informs its community and engages its readers in order to help the Big Apple maintain its vital and supportive gay legacy.

Next Magazine is available on a weekly basis throughout New York City, Upstate New York, New Jersey, and Fire Island, and 24/7 internationally through its web component, NextMagazine.com.

bojo2112jon said…
Good morning everybody! Thank you for this article in this blog, it's very interesting for me, I really like to read your blog when I have free time! But I want to tell you a few words about studying! I really like how this agency helps me in my studies (you can read master papers reviews here). All authors understand directions clearly and also gives you work back in enough time for any revisions. Early, and great . I have used this writing company before and it always delivers excellent essays!
May 16, 2022 at 8:35 AM