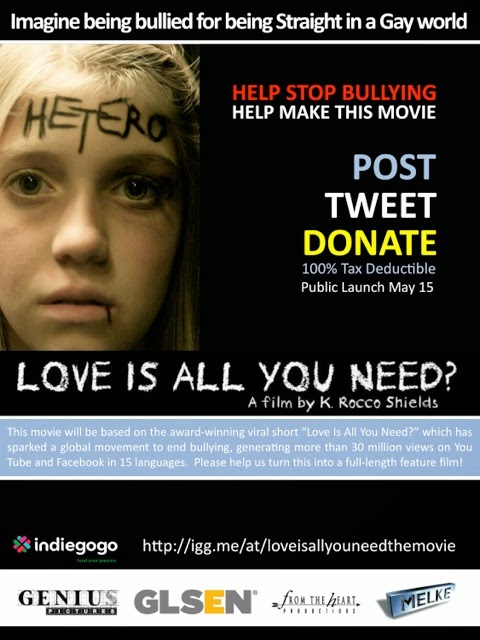 A feature length movie, currently in pre production, will be based on the premise set by the award winning viral short “Love is All You Need?’  which has sparked a global movement to end bullying, generating more than 30 million views on You Tube and Facebook in 15 different languages.

Imagine a world where Gay was Straight and Straight was Gay. Challenging our current conception of the terms ‘Gay’ and ‘Straight’, this controversial short film, written and directed by K Rocco Shields of Genius Pictures, switches not only the meaning of the terms but with it the social and cultural prejudicial responses.

The short film introduces us to a young teen Ashley who has a crush on a boy at school.  These feelings go against everything Ashley’s world has ever taught her.  Unfortunately, Ashley’s undeniable attraction to the opposite sex causes her to be the constant target of verbal and shocking physical abuse by the other students at her school.

“I can’t stress how important it is that kids, teachers and administrators have a chance to see a resource like “Love Is All You Need?”, and have a chance to experience it, think about it and talk about it. That’s how change is going to happen.” - Melora Sundt, Vice Dean Academic Programs University of Southern California Rossier School of Education.

While the feature film will include the story of Ashley, other scenarios will be presented using a ‘Crash’ style of story telling, interweaving multiple story lines and featuring multiple sub plots.

One of the most sought-after casting directors in Hollywood, Mary Vernieu, has signed on to cast the feature length production.  Regularly topping every “Most Powerful Casting Director” list in the US, Vernieu has well over 200 credits to her name including The Wrestler, Silver Lining Playbook, Black Swan, The Spy Kids franchise, Sin City and Requiem for a Dream.

Please give what you can… and spread the message $5 to Fight Bullying!

For high resolution images from “Love Is All You Need?” visit this drop box http://goo.gl/felwKx

SkyeSweet1276 said…
I never told how I write my essay, but teachers consider it the best, and all because I have an author, where I will write an essay competently and efficiently, an essay writing service to get the highest marks
January 19, 2023 at 4:50 AM