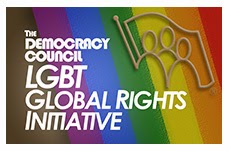 The Democracy Council (www.democracycouncil.org), the well-known civil society organization, will be celebrating the launch of its new LGBT Global Rights Initiative at a star-studded party in Los Angeles on February 9.

The new initiative, the first of its kind at a mainstream international development organization, will work directly with LGBT activists in repressive societies, including Russia and Iran, providing resources, tools, and training to grassroots organizations.

James Prince, President of the Democracy Council, said, “As Secretary of State Kerry and former Secretary Clinton have emphasized, LGBT rights are human rights.  We are proud to be explicitly including LGBT equality in our work – and call on others to join us.”

Greg Louganis, the Olympic gold medalist who has been outspoken regarding the safety of LGBT athletes at the upcoming Winter Olympics in Sochi, will be among the speakers at the launch event.  Said Louganis, "The situation for LGBT people in Russia, and in other parts of the world, is horrific. With its impressive track record, the Democracy Council is poised to make a real, immediate impact."

The LGBT Global Rights Initiative is being coordinated by Dr. Jay Michaelson, a leading LGBT activist who was recently the Vice President of the Arcus Foundation, the leading funder of LGBT issues worldwide, and who coordinated the U.S. LGBT movement’s response to the worsening situation in Russia.

Michaelson has already reached out to activists in several countries to discuss how the Council can help.  Said Prince, “There is no time to lose.”


WHAT: Launch of the Democracy Council LGBT Global Rights Initiative

INFO: www.democracycouncil.org/lgbt
Olympic gold medalist Greg Louganis will be among the featured speakers