Over 6,000 Expected at Out on the Mountain @ Magic Mountain Friday, September 20th

Six Flags Magic Mountain’s annual “Out on the Mountain” Gay Night returns this year on Friday, September 20, 2013.  The entire park goes gay for the night, which provides an safe and inclusive environment of fun for the LGBT community, with rides, dance party, and performers.

Out on the Mountain is the creation of Six Flags Magic Mountain and DJ Ray Rhodes started in 2008.  Over 6,000 people are expected to attended this sixth annual Southern California event of thrill rides and private gay party, while raising funds for local gay charities and organizations.  The entire park is closed to the general public for this private GLBT party from 6pm-1am.

"This is an exciting event to put on each year, where LGBT of all ages can enjoy an evening together with music, rides, and great fun," says DJ Ray Rhodes.  "While I've been a DJ all over North America as well as a club promoter for many years, this event still holds a special place in my heart because of how it helps also so many worthwhile LGBT organizations and charities."

Natalia Kills is a British pop provocateur with a sophomore album "Trouble" just released by Cherrytree Records. Since her critically acclaimed debut album "Perfectionist" in the summer of 2011, Natalia Kills has toured the world with Katy Perry, Bruno Mars, and Black Eyed Peas, that eventually included headlining her own jaunt in Europe. Two tracks from her debut album, “Free” feat. will.i.am and “Mirrors,” went Top 10 in Europe and sold over 750,000 copies. Natalia released her video for "Problem" in June to rave reviews and views surpassing 1 million on VEVO.

Shangela is a multi-talented artist that has performed all over the world, including being featured as one of OUT Magazine's Most Compelling People of 2011 and the inaugural winner of the California Entertainer of the Year pageant in 2010.  She has been on multiple seasons of RuPaul's Drag Race seasons, as well as 2 Broke Girls, Community, Dance Moms, Detroit 1-8-7, The Mentalist, Toddlers and Tiaras, and Lady Gaga's "Applause" lyrics music video, among others.  Her comedy act as LaQuifa has been seen on LOGO and at comedy events nationwide.

Jessica Sanchez, the runner up American Idol season 11, first started out on Showtime at the Apollo at age 10 and America's Got Talent at age 11.  Her debut album from 19 Recordings/Interscope Records, "Me, You & The Music", features songs including "Tonight" (featuring Ne-Yo) and "No One Compares" (featuring Prince Royce).  Earlier this year, she was a guest star on GLEE.

DJ Ray Rhodes has DJed at a number of high-profile events including TigerHeat (the largest weekly gay event in the Western US), Out on the Mountain, AIDS Project Los Angeles/APLA Summer Parties, West Hollywood Halloween Carnivale, Gay Days Anaheim, and The White Party. He has DJ'ed at events throughout North America.  He is a prior winner of the West Hollywood "Outstanding DJ" award and has been a top six finalist for the "Best Resident VJ" award by Club World Awards.

Kwanza Jones is a four-time Billboard charting indie artist.  Her album, "Supercharged", has been described as a “feverish mix of high-energy dance music”. More than a singer and songwriter, Kwanza Jones is an outspoken advocate of equality and empowerment causes. Her song “#StopHate” has been called “a powerful anti-discrimination anthem.” It serves as a compelling call-to-action to promote human rights and acceptance for all.

In addition, AJ Stacy from RuPaul's Drag U will be one of the featured comedians.  Special guest hosts include models/activists Colby Melvin and Brandon Brown of COLBRA Entertainment.

Tickets, which include free parking, are on sale in advance for $39 at OutontheMountain.com, with gate price of $50.  Tickets that include an all-you-cat-dinner buffet in the picnic area from 7-9pm are available for $52.  VIP tickets are available for $150 and include front-of-line ride access, all-you-can-eat dinner, beer/wine drink tickets for those 21+, $10 in Bugs Bunny bucks, and premium parking.

Host hotel is the Hilton Garden Inn Valencia which is offering a special $99/night rate single/double occupancy and includes a hot breakfast buffet. 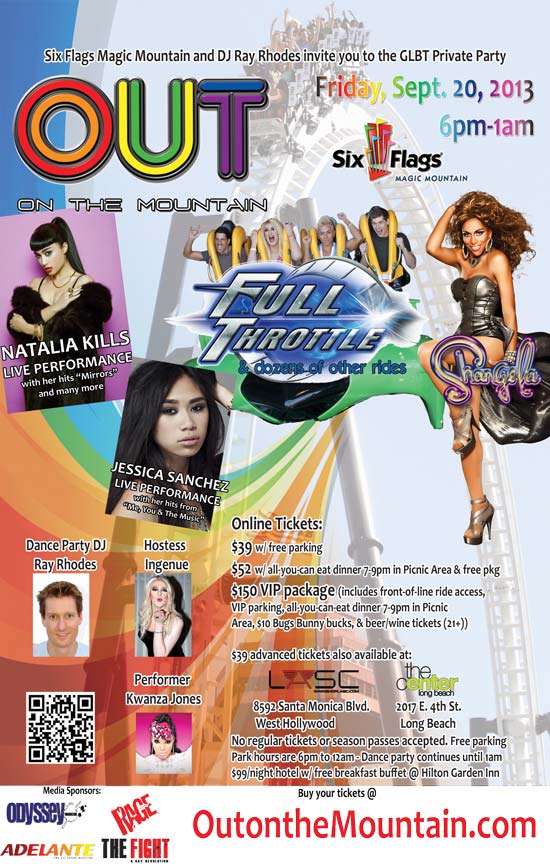