By Pink Banana Media - April 19, 2013
Jason Somerville is ranked among the world’s leading poker players, with winnings in excess of $4,800,000 to date. Over the course of his nine-year career, the 26-year-old poker phenom has consistently performed well in major tournaments, including The World Series of Poker (WSOP), World Poker Tour (WPT), Spring Championship Of Online Poker (SCOOP) and others. With a distinction as being the sport’s first openly gay professional competitor, and in addition to being a valued coach, a respected player and a fierce competitor, Somerville is also a sought-after host, commentator and content creator. Somerville’s expertise and interests also include eSports (particularly, League of Legends & StarCraft) and mixed martial arts (as a UFC super-fan and black belt former instructor in karate). 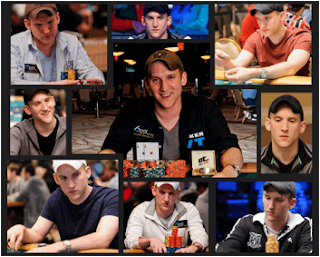 Jason Somerville started his poker career at age 16, playing home games in Long Island, New York.  As he had always been both computer savvy and extremely competitive, Somerville found a true passion for online poker. Upon graduating high school he began to dedicate himself to the game, and at 17, Somerville won $5 in a free online tournament. Somerville snowballed that initial stake of $5 up to $100 in one month, $1,000 in 3 months, reaching $10,000 after six months and eclipsing $100,000 just one year later.
Somerville went on to college, only to find his mind focused on the strategies and tactics of the game of poker. A chronic illness kept Jason home for a great deal of his upper teenage years.  As Jason recovered, he increasingly felt the desire to focus his time doing what he loved and not simply what was expected of him.  Having earned over $1,000,000 by the age of 19, his parents begrudgingly accepted Jason’s choice to leave school and play full-time.
Over the next six years, Somerville competed in some of the highest stakes tournament poker around the world.  Somerville’s resume features two wins and a second place finish in the Full Tilt Sunday Major, two wins and a second place finish in the UltimateBet Sunday Major, one Spring Championship Of Online Poker (SCOOP) title for over $2,000,000 and several top finishes in online “Player of the Year” races. Somerville’s achievements include a 1st, 2nd, 3rd, 4th and 5th in World Series Of Poker (WSOP) bracelet events and a World Poker Tour (WPT) final table for another $2,500,000 in cash prizes.
In 2012, Somerville made his first deep run in the WSOP main event, finishing 69th, playing for several days at the feature table broadcast on ESPN.  He was selected as one of the World Poker Tour’s “Ones to Watch,” a season-long recurring feature on the WPT.  For the first time, Somerville was invited to participate in the premiere 64-person 2013 National Heads-Up Poker Championship on NBC.  Somerville shot a video blog covering that experience at the event for his YouTube channel.
Somerville is also no stranger to hosting and commentating on poker events.  He has worked in front of the camera at PokerVT.com, becoming their second most-viewed instructor behind frontman Daniel Negreanu himself. He has done commentary work on the WSOP live stream including the 2012 Senior’s Event, a $1,000 NLHE and the $10,000 PLHE championship – which lead to his invitation to commentate on the ultra-exclusive $1M buy-in One Drop event which paid over $18M to the winner.
In addition to on-camera work, Somerville is well versed in content creation, producing and directing. He created a 30-episode YouTube series called “Eating Cake,” featuring his attempt at building his Cake Poker bankroll while doing live commentary that focused on both entertainment and education.  Somerville has also produced and directed a 15-hour training module based on a review of every significant hand from his SCOOP win.
In August 2012, Somerville was hired to coach World Series of Poker final table player Russell Thomas in preparation for his high stakes “November Nine” battle with the other eight finalists. Somerville developed an extensive training program for Thomas, devoting three months to refining and provoking optimal performance at the final table. Russell, a relative unknown in the poker world, finished 4th for $2.85 million.  Somerville created, produced and co-starred in a docu-webseries covering that unique experience called “The Final Table.”
In his personal life, Somerville made waves in February 2012 by coming out in a celebrated and widely read personal blog post, which went live on Valentine’s Day. The reactions of both the poker and the LGBT communities were overwhelmingly positive from all corners of the world. Since then, among other coverage and accolades, Somerville was selected as one of Out Magazine’s “Out 100” as one of 2012’s most prominent gay activists, ambassadors and personalities.  Somerville has devoted time and energy to charitable endeavors, including organizations such as Long Island’s Gay and Lesbian Youth Organization (LIGALY).
In addition to his poker career, Somerville is considered an expert commentator on e-Sports, online gaming and mixed martial arts, as both a UFC super fan and a former black belt and instructor in Karate.
YOUTUBE LINK: http://www.youtube.com/user/JCarverPoker
TWITTER LINK: http://www.twitter.com/jasonsomerville
WEBSITE LINK: www.jcarver.org
FACEBOOK FANPAGE LINK: http://www.facebook.com/JasonSomervillePoker